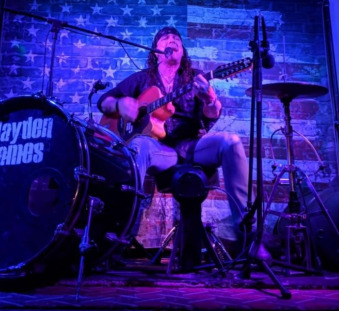 ONE MAN WITH THE SOUND OF MANY:   James David Murray, also known as "Hayden James - The Amazing One Man Rock Band," has over 35 years of experience in the entertainment industry. He has performed live and on record, aided live performances, and created, developed, and produced music. His unwavering love for excellent musical performances, his energetic and enthusiastic delivery, and his unending gratitude for the wonderful gift of music that God has given him all help him understand the relative and critical roles that the performance and audience factors play. Hayden James, billed as a "Rock Band," performs music from various eras and genres.  He can perform over 1200 well-known songs.

Born and raised in Northwest Ohio and a multi-instrumentalist who sings and plays guitar, bass guitar, piano/keyboards, drums, percussion, mandolin, ukulele, and harmonica, he relocated to Nashville, Tennessee, in 1994 where he spent most of 22 years as a full-time musician. In 2009, he decided to put all of his talents on display in a one-man show! A homemade drum set played with his feet and right hand, a customized 12-string guitar, a foot tambourine, harmonica, and vocals make up the one-man show. A firm believer in everything being played in real time, Hayden doesn't utilize any loop/recorder or vocal harmonizing machines, so everything you hear is being played and sung live, with no backing tracks or machine recordings remaining true to the traditional one-man band act. Hayden performs all across the Midwest and Southern United States bringing smiles and amazement to people of all ages!
Click here to book Hayden James – The Amazing One Man Rock Band at your event!

Hayden worked as a radio personality at Nashville Radio in Nashville, TN from 2006 to 2008 and Reality Radio in Riverside,CA in 2009 hosting "Rockin' the House w/Hayden James" on both internet stations. At the shows height it reached  millions of listeners world-wide.

Hayden was a founding member and bassist of the three piece Ohio Rock group "Somewhere In Athens". The band released three singles, one video and charted #1 on ReverbNation's Cleveland Rock charts for 12 weeks in a row before disbanding.

Hayden James is currently residing in Northwest Ohio writing, recording, touring and performing as a One Man Band.